IMAGINEERING STARTS THE YEAR AT LMEE 2020 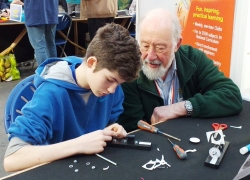 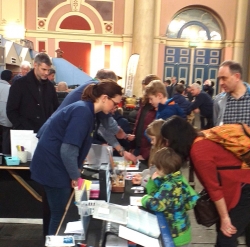 ​Imagineering gets 2020 - its 20th anniversary year - off to a flying start at the London Model Engineering Exhibition at Alexandra Palace.

It has been attending this event for over a decade and in recent years it has been a key feature of the Model Active Zone where youngsters can get some handson early inspiration in engineering and model-building.

This year was no different.

Imagineering had a wide variey of fun actiities that covered the whole STEM spectrum. There were active Morse Key Buzzers in operation and a series of Steady Hand Games to test how steady everyone was. The Hydraulic Arm attracted its usual high level of attention - from all ages - and there were plenty of enquires about the Imagineering Clubs and other projects in the Imagineering repertoire. Lots of fun with magnets and mateials too. The Imagineering Workbench was in operation where youngsters could work one-to-one with an engineer to make a small model they could take home.

On the science side, youngsters could learn about the 30 elements of the Periodic Table, many rare, to be found in their smartphones. They could find out why celery conducts electricity - as well as other fruit and vegetables - but plastic, wood and cork, not so much!!

There was plenty of maths to challenge those interested - fun game with dice, word puzzles, maths tricks, and a little game or two testing everyone’s knowledge on geometric shapes.

And for those who wanted to let their imagination run riot, there was K’Nex, the creative building system that fuelled someamazing creations!

All in all, a great weekend. And a big thank you to Meridienne Exhibitions, who run the event, for looking after the Imagineering team so well.

No comments yet. Be the first

Back to main news page