HIGH SHERIFF OF WARWICKSHIRE DROPS IN TO IMAGINEERING CLUB

At St Nicholas Church of England Primary School in Kenilworth 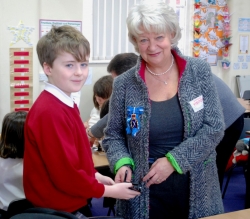 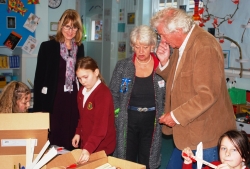 The two Clubs are run weekly for Year 6 pupils. The delighted children happily talked to Mrs Bell Smith about the working models they were making. In the Clubs the children learn about the modern engineering and technology of their everyday lives through hands-on activities.

Imagineering’s Chairman Bob Shanks explained: “The pupils learn about engineering and how to use tools while having fun putting together a range of
models, with real-life applications, that they can then take home. As well as setting them up with skills for the future, we also try to sow a seed or two
which hopefully will lead to them becoming the much-needed engineers of the future.” He added: “The Club proved so popular here, we had to open up the second one!”

Each Club is run by volunteer engineers – Imagineering’s own Chairman, Bob Shanks runs one with assistance from retired engineers John Shiell and Bill Bailes. The other Club is headed by Richard Earp, a senior engineer at National Grid, with two assistants.

No comments yet. Be the first

Back to main news page